Quite particular name appears on the map (Dead beach in English), and it seems close to some beaches we already had visited including Pochote and Tambor. How is it possible we passed so close without noticing it? As per the map, it seems like a crescent with trees and palm trees; which according to locals it is one of the favorites around here due to its white sand.

How could we pass by that place! Was it because of its name? Like in horror movies when spirits just appear for moment and then disappear, leaving no trace.

I don’t think so, and given that I have heard so much about this beach, I had to find it. Muertos beach belongs to Nicoya Peninsula, located between Paquera and Tambor, and practically behind the Pochote mangrove forest.

I arrived to Pochote looking for answers. A lady who rents kayaks explained to me that there were different ways to get there, unfortunately none as simple as I would have liked.

The easiest thing is to wait for the tide to come up, then take a kayak and move to the beach, in a 20 to 30-minute ride, depending on each person’s abilities. I’d have lasted 30, so I ruled it out.

The other option was to rent a boat and ask the captain to take me to the beach.

Finally, and perhaps the most difficult, taking the road by car and then walk along a path of rocks during low tide until find it.

I took the third option but watch out, it doesn’t mean it is the best one. The lady at Pochote did warn me about the third option. She told me that a challenging walk was waiting for me, but for some reason I didn’t pay much attention to this advice.

I drove to the mangrove by car along a road that I passed in almost 15 minutes. The truth is that it’s not that bad so I enjoyed the trip.

You got to drive until the end of the road and then get the ready for the walk. When the tide is low, you can see thousands of stones that make up the route.

If the tide goes up, you won´t be able to get through. I got lucky and started jumping stone by stone, being careful not to fall or slip.

It was about 600 meters walking on this tough road. I was tired and the sun was beating on my face, but all good; I was very excited about the destination I was about to discover.

As long as the beach is as incredible as the locals say, the effort will be worth it. Meanwhile I was overcoming obstacles, I kept thinking about a spot I visited in Golfito. 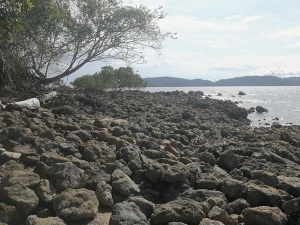 It was recommended by a local and I didn’t like it very much. Would it be the same for me this time?

I arrived to the sand sweating but I was lucky cause I did not regret the journey. It’s really white sand, the water is clean and crystal clear.

Tall palm trees border this entire beach that got a crescent shape, with some other trees lying on the coast.

I saw a group of tourists enjoying in the shade and two yachts parked almost in front of the beach, explicit proof that it’s worth being there.

Soon, I hope to return to Muertos beach. I’ll definitely do it by kayak.