The jump of the whale: imposing greeting from the queen of the sea

“It’s a humpback whale with its young,” the captain said. Beautiful, imposing. It doesn’t seem to be self-conscious (it doesn’t have to, it’s huge).

A few yards away, I see a giant animal. I’ve never seen it before. A tail bursts over the sea and splashes the boat where eight tiny amazed people are seated. That day I realized how small I am, an ant in the sea.

“It’s a humpback whale with its young,” the captain said. Beautiful, imposing. It doesn’t seem to be self-conscious (it doesn’t have to, it’s huge). 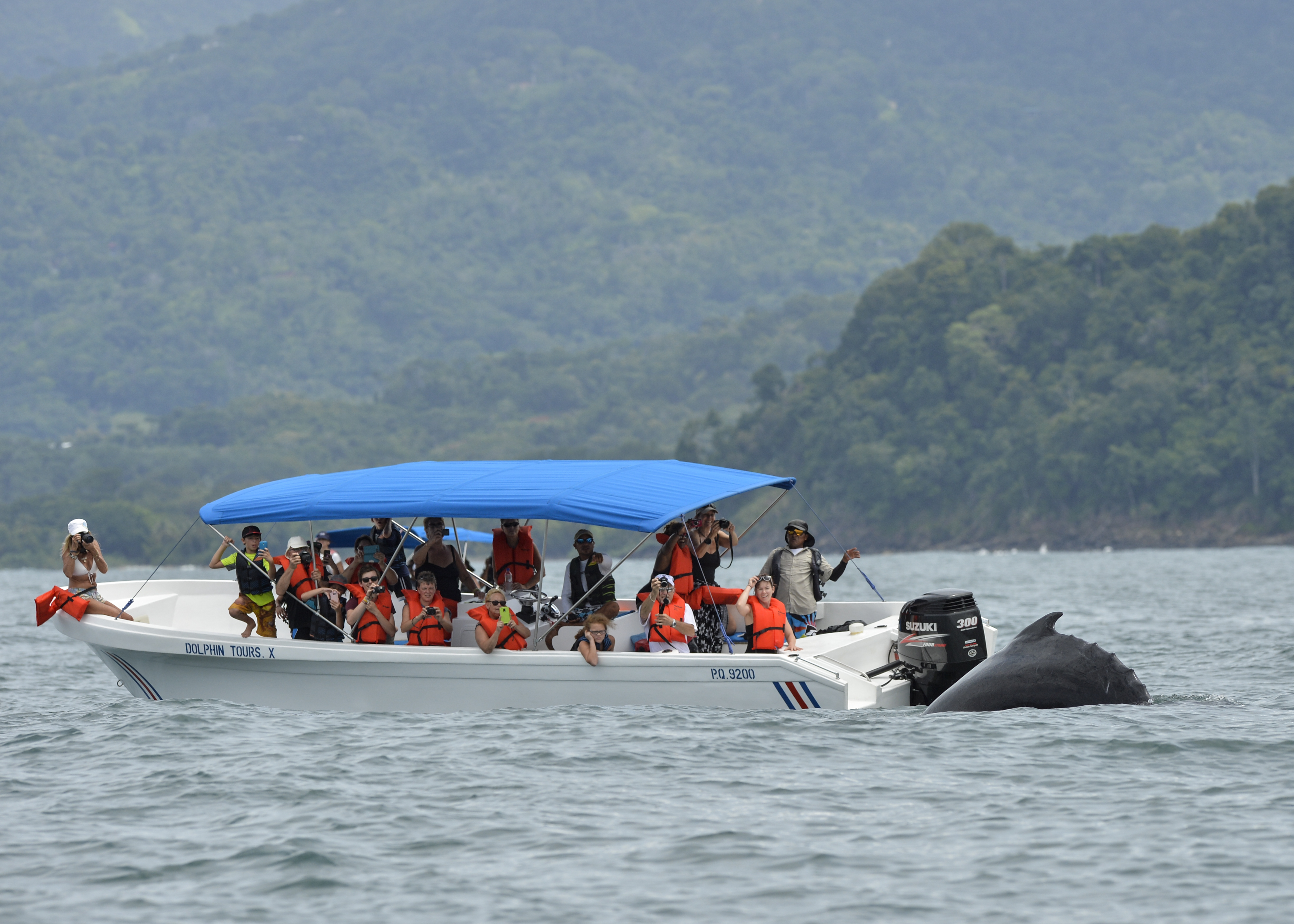 It hides for a few seconds and at any moment, when everybody is staring at the sea, it jumps. As a way to show off its unique beauty.

I heard once my mom saying, “Essence doesn’t come in barrels”. Maybe not, but the essence of that spectacle comes from its size.

Yes, the size of the whale, the immensity of the sea.

It is curious because I did not feel frightened at any time. I think I was rather surprised to see the strength with which that cetacean came out from the bottom of the sea and jumped to show itself to the world.

I would say that it is like the king of the sea deigning to leave his palace to welcome us into his home and introduce us to his young.

A good photographer friend of mine, Marvin Caravaca, once told me that he was sent to cover whale watching in Uvita. His mission was to capture a cover image. I was sitting on the boat when suddenly the whale jumped a few feet away. Almost in front of him.

It was such an impression to see that giant in front of his eyes that he didn’t even have time to move his camera to focus on it.

Curiously, humpback whales tend to do more pirouettes and jumps in the southern Pacific of Costa Rica than in Guanacaste. Reasons are very simple (and understandable): water is warmer and it´s less windy in Uvita.

That day I could barely capture the image, which continues in my retina. The journey did not end there. The boat had barely moved when the captain asked us to stick our heads out. There were five dolphins playing with us.

The smartest animal in the world was chasing the boat. It was just like he wanted to join us on our journey through Uvita. Like we were advised that we would soon meet another whale on the way.

Although dolphins can be seen all year round, whales arrive in Uvita between July and October. It is more certain to see them between September and October, so you can take it into account when planning your trip. 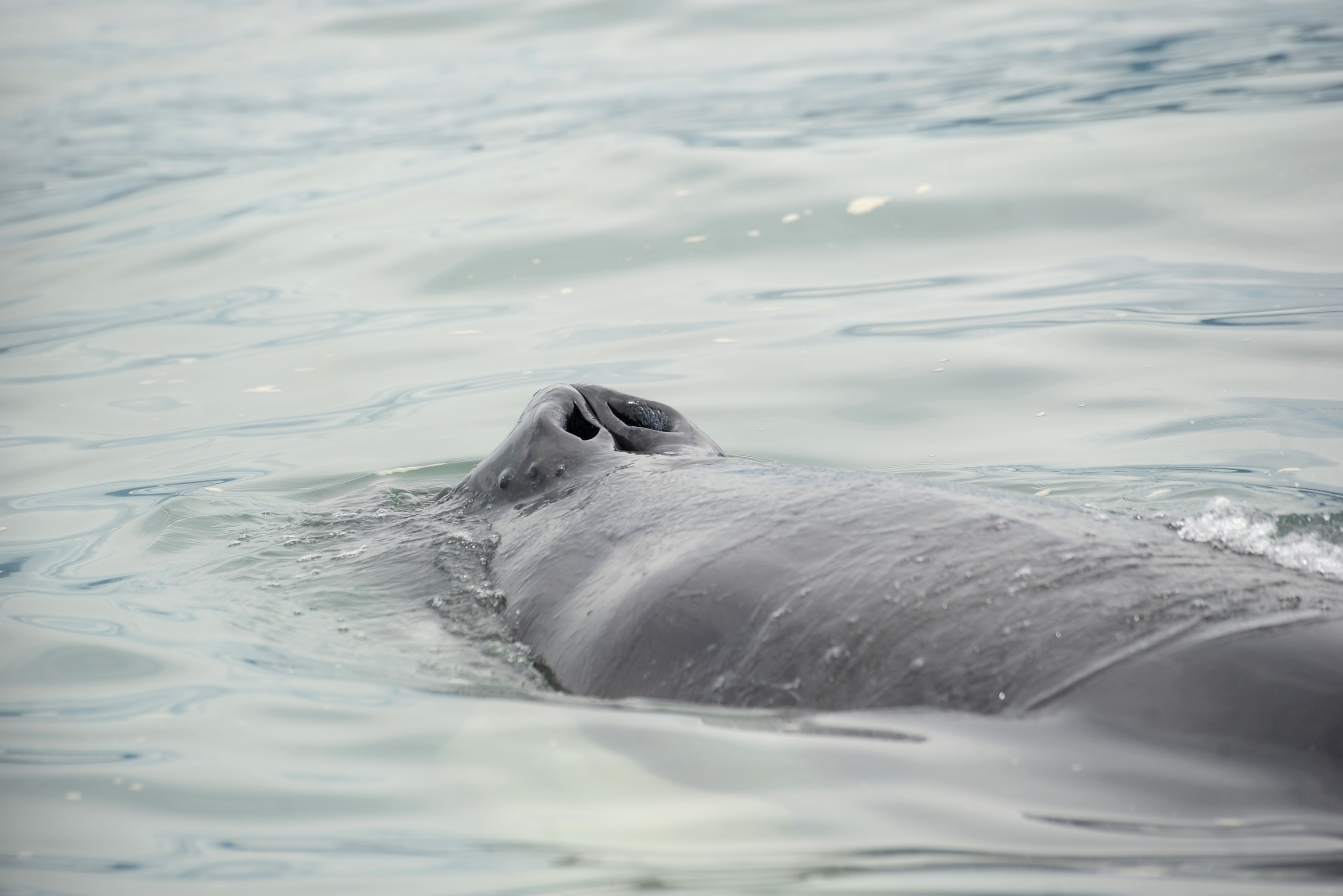 Underwater. After playing with the dolphins for a while, we realized that there was still one more stop left on our tour.

The moment to jump into the water arrived. An invitation to lower the adrenaline a little bit and enjoy the silence that is perceived at the bottom of the sea.

The captain has located the boat at the perfect spot where fish accumulate. All you need to do is put on your life jacket, your snorkeling gear and enjoy another show.

I’ve turned on the TV more than once and I’m amazed by the images from National Geographic, where the colorful fish pass so close to divers. This time I had to live it for myself and it was incredible. Magical.

I’m not an expert on fish, but they explain to me that species such as angelfish and parrotfish accumulate in this small place several times of the year, which allows you to enjoy an intense biodiversity.

What a day! It was in Uvita, in the Ballena Marine National Park. The tour already includes the ticket to the park, so it was worthwhile to visit it. I took the best of the afternoon by enjoying the beach and visiting the tombolo (whale tail bay).

It turns out that, for any reasons, there are particular rock formations that take shape of whale’s tail as the tide begins to rise.

That’s where the amazing photos you usually see on Instagram come from. From the viewpoints you can see this phenomenon.

Recommendations for your trip:

As the entrance to the Ballena Marine National Park is already included, GOPlaya suggests you to visit it. Get to know the beach and the famous tombolo.

There are other beaches nearby that you can also visit if you decide to stay all weekend. For example, Ballena beach and Piñuelas beach.

In the event of any natural phenomenon beyond our control, the date of the trip will be changed so that you can enjoy it with complete peace of mind.